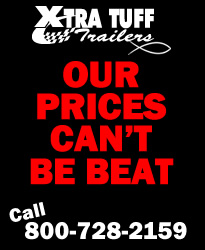 Thanks for your speedy response!

If i could get a handful of the 8 star metal screws and a bit, that would be fantastic! Xtra Tuff’s service has been great and I will certainly refer anyone in the market for trailers to you all!!! Thanks and have a blessed year!
Sincerely,

My Dad picked up my trailer a couple of weeks ago and I traveled down to South Carolina to get the trailer and the car that I was bringing back to Canada. The trailer was everything I was expecting and more, it towed like a dream empty or fully loaded and looks great.

I am the envy of my neighbors and I have passed your contact info along to them. I am enclosing a couple of pictures of the trailer at my place and one with a pot of maple syrup on the final boil. I brought down a jar of maple syrup for you to try and my Dad will ship that to you in the next couple of days. Your cane syrup is delicious and I appreciate that. The transaction was smooth and I was happy to have dealt with you.

I just wanted to send you an email thanking you for the great trailer. I drove up to your office, and your staff, Nikkie and JC, were great to deal with and were very helpful. I purchased the 7×16 slant-v and love it. The trailer is awesome and everyone is asking me where I got it and I tell them it is worth the drive to come see you. I look forward to buying more trailers from you in the future as my business grows, and I will be referring you to everyone I know.

Once again thank you for the great product you sell and the people that work for you.

In the past couple of months I have really missed the other trailer (7×18 V Nose) I had purchased from you July of last year.

I believe I told you that I sold it a couple of months back to a fine young Christian man that was just starting out with a new Christian Ministry and was in need of a trailer. He was going to purchase a 6 x12 because that is all he could afford after shopping around some dealerships in the Atlanta area and also searching the internet. My brother-in-law lives in Douglasville, Georgia and had come to Augusta on a Saturday two or three weeks before Christmas to pick up a riding mower I was giving him. He noticed my trailer and was really impressed with it. I showed it to him and told him it was for sell and the amount I was selling it for. He couldn’t believe the amount I was asking for it and only wished he could buy it. I told him it was 7×18 and was only about 6 months old (it was really still brand new because it was parked in my backyard the day I purchased it & brought it home & it had only been used to store a few things in it & it didn’t move from there until the young Christian man bought it). I told my brother-in-law that I was selling this trailer because I need a trailer with a larger door opening to be able to get this one main piece of equipment in it. I didn’t realize when I purchased the 7×18 trailer that the main piece of equipment I wanted in it wouldn’t fit through the door opening. He said he knew someone that was looking to buy a new trailer and he would call the guy when he got back home.

The next day my brother-in-law called and asked if it was alright to give the young man my phone number. The young man called the next day and made arrangements to come to see the trailer in a couple of weeks. He and a friend came on a Saturday two weeks later and it didn’t take him but about five minutes, if that, to say he wanted it and in less than 10 minutes they had written the check, hooked up to the trailer and was ready to head back to the Atlanta area. Fastest sale I have ever made on anything. I sold it for $50 less than what I paid for it. I hadn’t advertised the trailer and I hadn’t even told anyone else it was for sale, matter of fact I was going to wait until sometime after the first of the year to even begin to try to sale it. I told both my brother-in-law and the young Christian man how I had searched the internet for a well built trailer that was reasonably priced for several weeks and was also praying about it during this same time. I believe God led me to the XTRA TUFF TRAILERS website. Not only are they extremely well made, but they have the best prices and the best warranty as well. I also told them to tell others that were interested in purchasing a trailer or trailers to check out your website and give you a call.

I’ll send you all the business I possibly can.

Hope you have a great day.

Your Brother in Christ,